Optical microscopy is a technique use to examine specimens mainly transparent. Opaque specimens are considered if the reflection surface is not completely pulished. Light passes through the specimen at different depths, which causes a blurry image due to the light detection coming from areas out of the plane of focus, reducing importantly sharpness, contrast, and image resolution.

Confocal laser microscopy technique became very successful after the development of laser technique. It obtained excellent results in several areas such as medicine, biology, or geology, because of its unquestionable advantages compared to the conventional optical microscopy. The principle of confocal laser microscopy is based on the elimination of the reflected light or fluorescence from the planes out of focus. To that end, the specimen is illuminated point by point with a laser line, and the only light detected is that of the focal plane, then, eliminating the light beams above and below the plane of focus, thus images of high sharpness, contrast and resolution are created. Also, confocal laser microscopy enables to obtain optical sections of the specimen, which allows the study of 3D images.

Laser capture microdissection is focused on the observation and separation of unique cells or small cell groups from a heterogeneous tissue in an efficient, rapid and targeted manner, which makes possible the systematic study of the quality and quantity of biomolecules (DNA, RNA, or proteins) in specific cell populations. This technology, firstly developed for molecular analysis of tumors, can be applied on a wide variety of tissues, and facilitates the study of the molecular bases of many diseases such as cancer, rare diseases, degenerative diseases, diabetes, and hypertension, among others.

Microscopy and Molecular Imaging Unit in GENYO is focused on the application and development of different advanced techniques of confocal laser microscopy, as well as the analysis of the dynamic localization and distribution of molecules of interest in cells or animal models, opening a wide range of new possibilities in addressing dynamic studies of cellular processes. Furthermore, laser capture microdissection technique available in the Unit, which allows isolation of pure cell populations or individual cells to the subsequent genomic or proteomic study.

The main task of the Microscopy and Molecular Imaging Unit is to provide technical support in the area of confocal laser microscopy and laser capture microdissection, both to the research groups of the Center and outside entities.

The next generation technological equipment of GENYO, together with the large experience of the scientific and technical team specialized in advanced confocal microscopy and laser microdissection, makes it possible to develop the applications required for the users of this Unit, and to achieve the main priorities of GENYO, such as the integration of basic, applied, and translational research, minimizing the times between the development of new technologies, products and procedures, and their application in the health setting. The Unit also makes it possible to participate in the development of new diagnostic systems, prevention and treatment of diseases associated to human genetic variability, by the application of new imaging techniques, in order to reach an investigation of excellence in oncology and genomics areas applied to the health care.

The activity of the Microscopy and Molecular Imaging Unit is focused on epifluorescence microscopy and confocal laser microscopy, which allows to analyze the localization of molecules of interest using immunofluorescence techniques and fluorescent fusion proteins such as CFP, GFP, YFP, mRFP, mCherry, among others, both in fixed and living cells, which makes it possible to develop studies on dynamic cellular processes, among others. Furthermore, another activity of the Unit is laser capture microdissection technique, which facilitates the isolation of specific cell populations in heterogeneous tissue sections or individual cells for subsequent genomic and proteomic study.

The light source in epifluorescence microscopy is a lamp with light containing different wavelengths. A filter is used to gain the adequate excitation wavelengths, depending on the fluorochrome of the specimen, so that the reflected light or emitted fluorescence light after passing through an emission filter system, reaches the detector or camera, then obtaining a digital image in the computer. 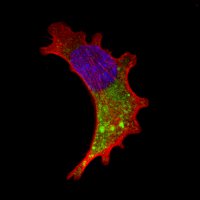 In contrast to epifluorescence microscopy, confocal laser microscopy allows to obtain high-resolution images, as well as sharpness, and contrast of only one focal plane of the specimen when light from planes out of focus is eliminated. Confocal laser microscope captured images of the specimen that reflect fluorescent light; in that case, the light source is a laser line, which excites the specimen point by point and moves along the focal plane by a laser scanning system.

Fluorescence from the focal plane of the specimen is detected by a photomultiplier tube, and converted into electrical signal, which is digitalized and converted into a signal for display into a video monitor, resulting in an exceptional quality image. Confocal laser microscope allows the study of specimens marked with several fluorochromes, by the capture, without overlap, of the signals coming from the fluorochromes through the tailor-made detection of the emission spectra of each fluorochrome; Then, multiple images are generated, one for every fluorochrome detected, which can be finally overlapped in one image.

One of the main advantages of confocal microscopy is the possibility of changing the focal plane position, and capturing images at different Z-axis heights of the specimen. Then, obtaining a set of optical sections to which it is possible to apply reconstruction techniques able to provide visualization of 3D structure of the specimen.

Laser Capture Microdissection allows the isolation of regions of interest from cryo frozen tissue sections or FFPE tissues, cell populations or even specific individual cells from fixed or living specimens marked with immunohistochemical, immunofluorescence methods, or techniques expressing molecules of interest fused to fluorescent proteins in order to perform a later genomic or proteomic study.

The impossibility of isolating pure groups of cells was a major constraint in the study of a specific type of cell. However, the development and evolution of microdissection techniques resulted in laser capture microdissection system. It is an efficient, accurate and safe from environmental contamination technique, addressed to investigators interested in separating cell populations or specific unique cells for the later molecular analysis.

The Microscopy and Molecular Imaging Unit of GENYO is equipped with the Zeiss PALM Microbeam IV Laser capture microdissection system. The Zeiss Axio Observer Z.1 inverted microscope is available for tissue or cellular sections observation providing excellent quality images. Thanks to the PALMRobo software, tissue or cellular regions of interest can be easily and rapidly localized on the screen. The drawing tools of the program allow toselect cellular groups or unique cells. The system’s UV laser (355 nm) is used to both cut and catapult cellular groups or unique cells into the adhesive cap of the collection tube to be studied. The “Cap Check” system of the program is used to verify the catapulted sample in the cap, which provide a higher reliability of the system.

The Unit is equipped with Epi-fluorescence microscopy, confocal laser microscopy, and laser capture microdissection systems. The main characteristics of all of them are the following: 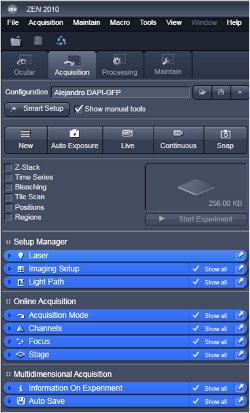 The Microscopy and Molecular Imaging Unit is under the scientific direction of Professor. Dr. María José Serrano Fernández, PhD. who has large experience in the field of confocal laser microscopy and laser capture microdissection.

Dr. Serrano Fernández obtained her PhD degree in 2003 at the University of Jaén, Spain. She worked at the Health Sciences Department., and focused her investigation on the study of the phenotypic and genetic characteristics of circulating tumor cells present in the blood of solid tumor patients. These studies imply the use of different microscopy systems together with phenotypic and genetic analysis software. A patent has been developed under this line of research based on the phenotypic analysis of circulating tumor cells with multiple markers. She is completing the studies by using platforms such as laser microdissection systems, since laser capture microdissection is a useful and reliable technique in the isolation of pathologic pure cell populations into the tumor mass. This method together with molecular biology and confocal laser microscopy, is to distinguish which molecules are involved in the metastatic process and the tumor dissemination.

Dr. Raquel Marrero Díaz is the responsible for the technical direction. She obtained her PhD degree at the Universidad Complutense of Madrid in 2009. She wrote the thesis at the Confocal Microscopy Unit of the Centro Nacional de Investigaciones Oncológicas , where she acquired wide formation and excellent experience in advanced epi-fluorescence microscopy and confocal laser microscopy techniques such as photoactivation, FRAP, FLIP, FRET, time-lapse microscopy imaging, as well as imaging processing and analysis. She is actually tasked with managing and maintaining the microscopy and laser microdissection equipments of GENYO. She also provides technical support to internal and external users of the Unit, on the experiments design and the correct samples preparation. She also conducts training courses to the research staff about microscopy techniques and processing systems and imaging analysis. She carries out new techniques and advanced applications in cooperation with the scientific director in order to improve quality in services of the Unit.

If you are interested in any service of the Microscopy and Molecular Imaging Unit, you have to implement the Application Form to register as new user, and send it to one of the following addresses: